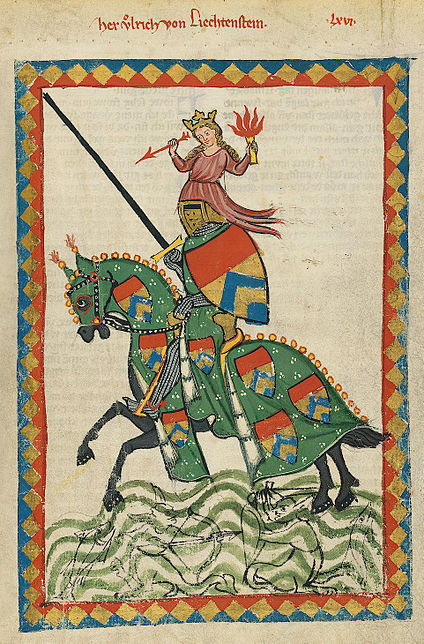 My loves, we are now, as ever, surrounded by basics and their whack-ass understanding of medieval history. As a Lady Historian™ I am often subjected to tirades from Nice Guys lamenting how I, a lady, am breathing in public, but how they a Nice Guy are going to be chill about it because they ‘still believe in chivalry’.

That is not what chivalry is.

Now, I don’t even mean not believing an expert in a subject because of Dunning Kreuger isn’t exactly polite, when I say ‘that is not what chivalry is’. What I mean is that chivalry really isn’t about treating the ladies right (or whatever the fuck passes for right in your mind when you are out here actively harassing women who are smarter than you, which is to say all of them.)

So what the hell is it, then? Chivalry literally means horsemanship, and first popped up as a term in Old French in the eleventh century, and comes from the word chevalier, which means horseman or knight. It’s important to note here exactly who knights were. Spoiler alert: it was rich guys. To be a knight you had to have some sort of aristocratic standing and be able to pull together a war horse and the full equipment expected of a cavalry man. This was not nothing. War horses, who were big bois, because they had to carry the weight of all that armour, were incredibly expensive, as was armour in and of itself. You also probably had to have a whole other horse for getting place to place because the destriers that could carry armour weren’t particularly fast, even when not weighted down, so probs you had a palfrey too. (#horsechat) This ain’t cheap.

So yeah, this is a set of rules for dudes who were involved in warfare, pretty well off, and driving big ass animals around all over the place. It was never, however, a fully realised set of ‘rules’ in the way that we think about these things. Unlike the rules of romance that we see explicitly laid out in Capellanus’s de Amore, which we have discussed before, chivalry was something that grew out of a number of places.

The Peace and Truce of God, which was established by the Church in the late tenth century in the hopes that rich guys would stop killing each other randomly influenced it. According to the Church, it was the duty of all knights to refrain from killing outside of just war. Just war was usually determined as war in the name of Christ. So, you know, feel free to kill non-Christians. Go nuts. What you shouldn’t do is go about slaughtering other Christians and terrorising the locals. These guys should consider themselves a ‘knight of Christ’ (miles Christi), and conduct themselves accordingly.

This idea is what morphed into a more nebulous idea of chivalry, which was sort of loosely talked about in three places: the poem Ordene de Chevalerie where a captured knight agrees to teach Saladin the rituals of Western knights; Ramon Llull’s Libre del ordre de cavayleria, which is about knighthood in general; and the Livre de Chevalerie of Geoffroi de Charny, which is about how to establish prowess as a knight. Altogether, these works essentially focus on responsibilities towards the Church, one’s Lord, and the nobility in general.

Dudes had big horses, got paid to kill, and were essentially linked to a lord just by their word. You need to keep these guys in check.

So, then, in all this where the fuck are the ladies at? Answer: nowhere that your filthy mind needs to be worrying about, sir.

Yeah, the ladies don’t come up in codes of chivalry really at all – they only come up in medieval literature about chivalry, and guess what literature that is? Motherfucking courtly love literature, is what.

So basically the rules that chivalric men are supposed to be following in regards to women are the ones that Capellanus laid out, and they aren’t exactly the sort of thing that anyone should be proud of living up to. I mean, yeah, you probs should not be having sex with your boss’s wife. That is a very good idea. I’m not exactly sure how great that is as a guiding set of principles to be proud of, however, especially given that most people don’t live in their bosses’ homes any longer.

And you know, there is that whole bit in Capellanus where it’s like, yeah feel free to rape peasant chicks. Treat yo self.

Forgive me if I don’t feel overwhelmingly valued by all of this.

(I mean I bet you Drake would defo describe himself as chivalrous though. What a legend.)

Basically then chivalry and the chivalric code has fuck all to do with women at all. It’s a bunch of rules about how to conduct yourself if you are a rich dude, with a horse, a lot of weapons, and time on your hands. Saying that you treat women well because of chivalry makes about as much sense as saying you treat them well because of the highway code. It’s just not a thing.

More to the point, anything slightly about women in concepts of chivalry is the same old creepy-ass courtly love stuff, and mostly is just about keeping your boner in your pants while your boss is looking. (I do advocate that men keep their boners in their pants unless otherwise requested, however, and it will probably save you grief with HR if you commit to this at work at the very least.)

The TL/DR? That’s not what chivalry is, and you are being a sexist muppet right now. Off you pop.

For more on myths about the medieval period and ignorance, see:
JFC, calm down about the medieval Church
On Medical Milestones, Being Racist, and Textbooks, Part I
On Medical Milestones, The Myth of Progress and Being Racist, Part II
On medieval healthcare and American barbarism
I assure you, medieval people bathed.
On colonialism, imperialism, and ignoring medieval history
“I wasn’t taught medieval history so it is not important” is not a real argument, but ok
There’s no such thing as the ‘Dark Ages’, but OK
On the Concept of the Renaissance and Outkast’s Hey Ya

For more on women in the medieval period, see:
On women and work
Considering bad motherfuckers: Hildegard of Bingen and Janelle Monáe
On the Ideal Form of Women
Such a nasty woman – on Eleanor of Aquitaine, femininity, reputation, and power
Islam was the party religion, or, why it is lazy and essentialist to say that Islam oppresses women
Let’s talk about Game of Thrones part 2: on marriage and Sansa

7 thoughts on “That’s not what chivalry is, but OK”