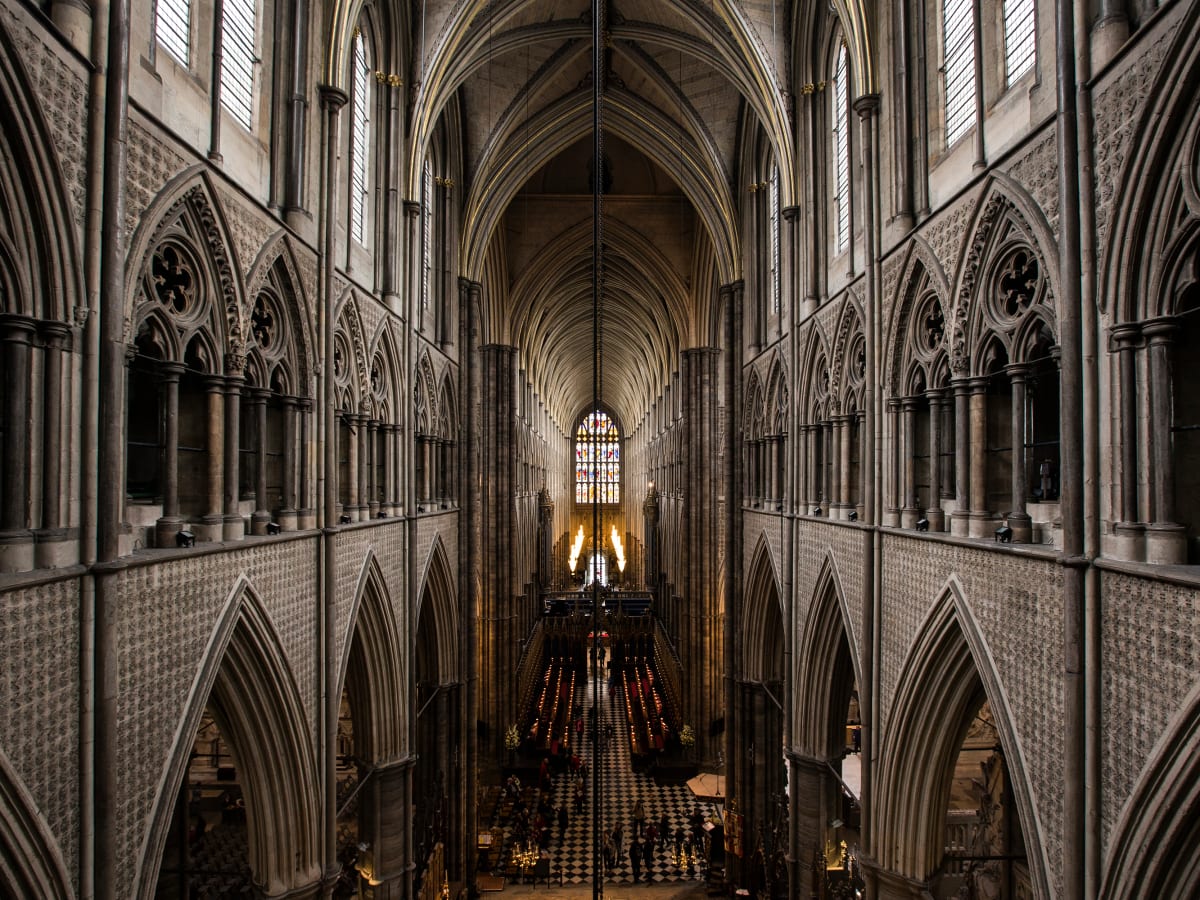 My friends, I want today I want to talk to you about Westminster Abbey. I know you probably are aware of it, being as you are able to read English and it looms pretty large in the history of the English-speaking world. And there’s a reason for that. It’s a pretty special place with explicit royal connections in a really weird way for the medieval period.

See, fancy kingdoms like France often had multiple churches attached to the throne that served very explicit and discreet purposes. A typical high and late medieval French monarch would expect to be crowned in Reims cathedral, would visit the vast collection of relics in the Sainte-Chappelle which helped to underline his status as a favoured ruler, and then be buried among the other royals in the Basilica of St Denis. English kings, being from a less important and wealthy place didn’t have the luxury of three separate places to be high fallutin in. They had one, and it was Westminster.

I went to visit it the other day and thought I might talk you through the things that I would point out to you in Westminster if we went on a visit together, because it isn’t always easy to see the medieval features. And, well why is that? Well because except for the bones of the building because it is absolutely crammed to the rafters with huge ridiculous baroque monuments. For reference:

Now, to be fair some of these tombs are extremely metal and got very hard, to whit:

On the other hand, there is also a lot of tat celebrating dudes who got killed “by a Moor in the service of the Empire”. (I’m serious, that is a real tomb quote. The early modern period is the worst.) So, it is understandable that you might not notice all the medieval stuff which is just quietly there being interesting, unless I was yelling at you the whole time. But I would be yelling at you, because the establishment of Westminster is a specific medieval story.

Westminster was initially established between as a Benedictine monastery after a fisherman named Aldrich had a vision of St Peter who demanded that it get set up. Later on, it got fancied up from 1042 and 1052 by Edward the Confessor (c. 1003-1066). As was the style at the time, it was built in the Romanesque style. He promptly died a week after its completion and was buried there.

When William the Conqueror (1028-1087) took over the kingdom later that year he was like, “Oh you’re dead king is here. LOL K. I guess I am going to hold my coronation here to flex on him. You can tell I am the king because I just got crowned next to the dead one.” This was generally agreed to be a boss move, and from that point, to be King of England was connected with getting crowned inside the abbey.

A few generations later Henry III (1207-1272) decided that the Romanesque style was played out, and that he would rebuild the abbey in the gothic style. I am very happy about this. Because gothic stuff is actually the best. Thank’s for asking. And my man poured like, ridiculous amounts of money into doing just that. Like 45,000 marks, or about half the crown’s budget per year. Just nutso stuff. After spending all that cash he decided that he might as well get buried there.

Henry’s tomb was very cool and impressive, and very very large, as you can see when you try to see it from ground level:

This started a trend, and all the other royals and a lot of nobles decided that they wanted to get buried there too. The result is an embarrassingly good collection of tombs all around the main altar.

It can be hard to see the tops of the tombs from ground level, but they all have really interesting medieval details nonetheless, and you can really go famous royal shopping.

In particular I am really into the tomb of Prince Edmund Crouchback the Earl of Lancaster (1245-1296) that has all these cool little saints all around the bottom:

These little saints are incredibly cool because you can see a bit of what a medieval church would look like. See how you can see the leftover remnant’s of paint? That’s a great reminder that medieval churches were pretty much a total riot of colour. It’s the baroque people who wanted a white marble monument. When my boys decided to fancy up the painted.

And Westminster is absolutely full of reminders of that fact. You can find polychromy on statuary:

On the walls of various chapels and their furniture:

Or sometimes in just huge ass murals that some baroque dude didn’t manage to block with his racist tomb, like this Incredulity of Thomas:

Here it is with friend of the blog and contributor Dr Sara Öberg-Strådal, for scale.

Now the Incredulity here is easy to see, but interestingly, IRL a lot of the polychrome doesn’t show up to the naked eye, so a hot tip from a medievalist is that if you see a medieval statue or piece of moulding, take a picture of it, or even just look at it through your camera. Your camera can pick up the pigments better than your eyes can, and then you can show off cool pictures like this. No. I assure showing people these pictures is cool.

Another really important medieval feature, and what we had gone to take a look at is the Cosmati pavent on the main altar and on Henry III’s tomb. That’s this stuff:

A bunch of specialists from Rome were brought in to do the inlaying, and it is a special kind of inlayed cutwork. It represents the various planets and used to have brass plaques around it which read:

“In the year of Christ one thousand two hundred and twelve plus sixty minus four, the third King Henry, the city, Odoricus and the abbot put these porphyry stones together.
If the reader wisely considers all that is laid down, he will find here the end of the primum mobile; a hedge (lives for) three years, add dogs and horses and men, stags and ravens, eagles, enormous whales, the world: each one following triples the years of the one before.
The spherical globe here shows the archetypal macrocosm.”

This was meant to be read as a calculation for when the apocalypse might come, but is also a reminder of the place of individual people within the macrocosm, or universe.

The pavement is thus a really great reminder of the way that medieval churches looked, and how people related to them. They were very colourful bright places, and they were also meant to have their art “read” as a part of the experience of interacting with them. Viewing this pavement invited onlookers to contemplate mortality, the universe, and God. It was also super pretty.

The apocalyptic vibe of the pavement here is impeccable, but I have to tell you about my fav part of the Abbey – the thirteenth century chapter house, because oh man I had a whole freak out about it. A chapter house is the part of a cathedral or church where meetings are held, and they generally whip a lot more than conference rooms now. Especially the Westminster one which, and I cannot stress this enough, has an entire apocalypse cycle in it.

It starts off to your left hand side as you come in the building and you can see the four horseman of the apocalypse:

At this point I will start hyperventilating, but still point out to you the last judgement:

And we will laugh at all the little souls in hell:

And then HOLD THE FUCK UP, THERE SHE IS! THE WHORE OF BABYLON, THE BLOG’S MASCOT.

Look at this queen shit:

There are also lots of other beautiful scenes from The Apocalypse, with lovely little details.

If you can drag your eyes away from the paintings and look up, you will see God himself is sitting up there judging TF out of you for liking the Whore of Babylon too much. We will make peace with this.

And just when your brain is totally overloaded, there is one more thing that I will make you look at here, and that is the floor tiles:

This is probably the best preserved medieval tiled floor in England, and it includes an excellent Latin brag about the room, which reads, “As the rose is the flower of flowers, so is this the house of houses”. It’s perfect. I love it.

I will then start to complain that I cannot simply buy tiles like that for my kitchen, and curse modern taste.

And that my friends is a guide to what it is like to go to a medieval church with me and Sara. Anyway, trust me, this guide is better than going with me IRL because it will take four hours and you will get bored. However, I hope you picked up some hints and tips for thinking about and visiting medieval buildings. Sometimes we have to use our imaginations in order to get a picture of what they might have been like, but every so often you hit upon somewhere like Westminster that gives you the pure unfiltered stuff. I think that’s worth sharing.

For more on monuments and their meaning in the medieval period, see:
On the commemoration of royal death
Religious iconography has always been a prop
Look up, this church is judging yo

My book, The Middle Ages, A Graphic Guide is out now.

9 thoughts on “On visiting Westminster Abbey”