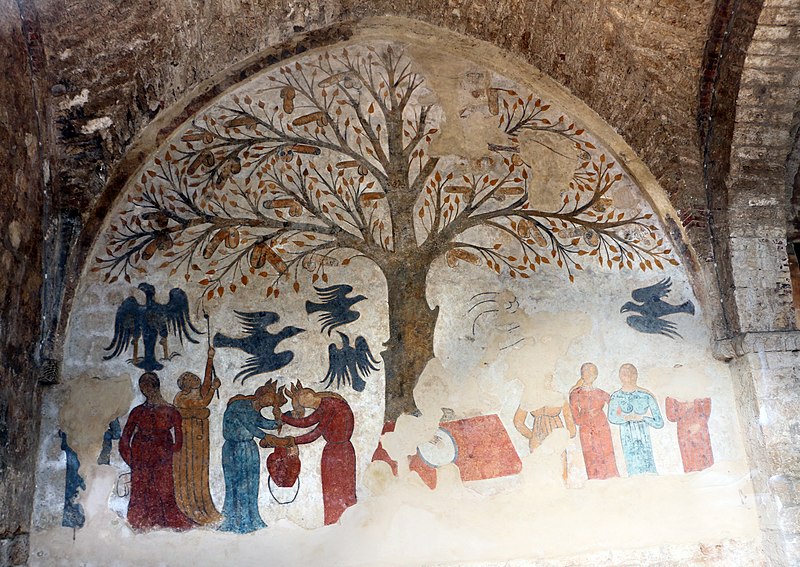 As I continue to pull myself out of the hole caused by finishing a book and recovering from COVID, I was reminded of something that I wanted to write about in January but just didn’t have the time or health to do it. I was made aware of it due to a particularly bonkers piece of Twitter lore which I am absolutely not going to unpack here, but it stayed on my mind because it displays an honest to god medieval attitude towards women and sex. So, without further ado I give you this exchange:

Obviously, this is an absolutely unhinged thing to be logging into twitter.com to opine on, but you may be wondering what I find medieval about it. The answers are several, and the first is the idea that women can be broadened into a flat category and general sexual statements made about the sexual interests of all of them. Half the population of the earth? Oh yeah, all of them are totally into the same thing. Sure bro. Cool.

From there, however, we can also see a conception of women and their sexuality as necessarily geared toward the passive and more specifically the receptive. This is a common conceit in both ancient and medieval ideas about women’s sexuality. Tertullian (c. 155 CE – c. 220 CE), who you may know as “the father of Latin Christianity” made what he thought was a compelling argument for this idea. First of all, in his opinion women be talking. Amiright fellas? And the feminine urge to never shut up was aligned with a more specific feminine openness which could and should also be thought of as lustful. As a result one must understand that for gossiping women, which is to say women, “their god …is their belly, and so too what is neighbor to the belly [the uterus].”[1] Of course, in the ancient and medieval conception of gender women are the horny ones, as all you regular readers know. But this embellishes that idea in order to label women’s sexuality as necessarily passive and coming from a sort of physical openness that invites quite anything in. Whether it be gossip through open ears, food through an open mouth, or, well, semen through the act of penis in vagina sex.

The sexual pleasure that women experienced as a result of their openness was not simply one that came from a desire to fill a void, however. Instead, women were also seen as unhealthily interested in having sex, and more specifically the sort of sex which would result in men ejaculating inside of them. This is because they were drawn to the masculine qualities that were inherent in semen. Women, from a humoral standpoint, were to be understood as cold and wet, whereas men were hot and dry. Being hot and dry was necessarily a better state of being because being masculine was necessarily better, and women were sort of like lizards, but for jizz instead of the sun. The late medieval medical manual The Secrets of Women put it thusly, “male sperm is hot because it is of the same nature as air and when it is received by the woman it warms her entire body, so women are strengthened by its heat.”[2]

And little wonder that they got so much heat off of semen, because semen was seen as the seat of masculinity itself. It was both created by the heat inherent in men, and gave them heat as well. It was therefore the masculine thing about men. As Thomas Aquinas put it, “sperm, contains a threefold heat: the elemental heat of the semen, the heat of the father’s soul, and the heat of the sun.”[3] Little wonder then that cold wet women were apparently absolutely desperate to avail themselves of some triple hot semen.

If you are enjoying this post, why not support the blog by subscribing to the Patreon, from as little as  £ 1 per month? It keeps the blog going, and you also get extra content. If not, that is chill too.

But women’s interest in being pumped full of semen wasn’t just about heat, it was also particularly about the actual delectation that they enjoyed in receiving said semen during the act of intercourse. Part of the reason that women were seen as more sexually interested than men was because they were seen as actually taking greater pleasure in sex, though there were arguments that their pleasure wasn’t as refined as that of men. This sexual pleasure was meant to be understood as a bad thing, because an interest in sex meant that one’s mind wasn’t on God who only wanted you to have sex for babies, not for fun. Whether or not it was considered seemly, the feminine interest in pleasure was seen as defining, and once again linked specifically to cum. The eleventh century physician Constantine the African (d. c. 1098) explained exactly why that was thusly: “Pleasure in intercourse is greater in women than in males, since males derive pleasure only from the expulsion of a superfluidity. Women experience twofold pleasure: both by expelling their own sperm and by receiving the male’s, from the desire of their fervent vulva.”[4]

Regular readers will recognise this as a reference to the prevailing two-seed theory of conception in the ancient and medieval period. It expressed the idea that both men and women released semen on orgasm. This semen was then thought to mix together in the womb to produce a baby. While this was the most common idea of conception there was also a one-seed theory favoured by basics like noted douche Aristotle (384-322 BCE). In this conception it was just men who contributed to the physical material of a fetus. Sperm was like a seed that implanted to the earth of the uterus and -hey presto-  baby.

Even in the one-seed conception there was a way of understanding women as just really really loving sexual intercourse, and spunk, however. The thirteenth century natural philosopher Albertus Magnus (c. 1200 – 1280) expressed that belief by stating that women’s sexual pleasure was a result of “the touch either of the man’s sperm in the womb or the penis against her sexual part.”[5] Bonus points to Albertus for thinking that maybe women were deriving pleasure from the experience of their own bodies, rather than just a reaction to men’s reproductive matter, for sure. However the first conceit here remains that women’s pleasure is likely tied expressly with ejaculate.

Albertus also points to the final medieval thing that my man the original poster thought – namely that women’s pleasure during sex was directly tied to their reproductive function. In the same way that the defining masculine thing was the sperm, for women it was their womb. Further the womb, like women more generally, was meant to be understood as passive and desirous of the active masculine sperm specifically in order to procreate. Favourite of the blog Hildegard of Bingen (c. 1098 – 1179) was able to express this in a slightly less misogynistic way than her male counterparts explain that during sex a woman is “like a threshing-floor pounded by his many stokes and brought to heat while the grains are threshed inside her.”[6] Here we are meant to understand that the delight women experience during sex is because they are aware of a productive meaning to sexual activity. According to Hildegard women aren’t taking pleasure because they are horny cold sex lizards, they are doing it because they want to be mommies. Which is, uh, if not better at least a bit different.

What all of these medieval ideas have in common with this random dude on twitter is a really limited and, frankly extremely basic, understanding of sexuality and of women more generally. In this idea women are framed as passive receptacles whose sexuality is defined in opposition to the activity of men. According to all these guys, women just sit around hoping a guy will ejaculate into them, and they define a sexual experience as being linked directly to that one specific action. Now Hildegard and this dude dress that up by saying that pleasure is linked to a theoretical fecundity and a pleasure that women get from, uh, being knocked up? A famously really fun thing to be that women just love. That is absolutely nothing other than a ridiculous attempt to divorce women’s sexuality from pleasure at all and place it firmly into the realm of the biological. Women in this case aren’t sexual entities in and of themselves who experience sexual pleasure in an array of ways. Instead they are defined by their potential maternal capacity, and so is their pleasure.

All of these views should be seen as astonishingly retrograde, but fundamentally the dude who wrote this was responding to thousands of years of conditioning to spout off these ridiculous ideas. He has internalised the ancient and medieval attitudes towards sex that say it is actually kinda bad and that people should avoid it if they aren’t attempting to have babies. He has then married that with modern attempts to recast sex in a reproductive guise because of some nebulous conception of biological function. Parroting takes like this doesn’t mean that he is regurgitating Church propaganda – oh no! He is simply being scientific. That would be cute except that it just doesn’t work either.

The great majority of people – men, women, and non-binary – have sex for all sorts of reasons. Procreation is undeniably one, but the fact of the matter is most people have sex much more often in their life than they have babies. There is no specific link between sexual pleasure and procreation that can be traced to every member of a specific gender. Nor should there be. Attempting to link sexual interest to biological drive, while regurgitating every idiotic idea of women’s sexuality that some dude from the eleventh century held is every bit as ideologically driven as when medieval theologians did it. Instead, I would encourage everyone to maybe just check in with their partners about what they want and are interested in during sex. And then maybe don’t tell everyone on twitter what you are doing and why.

For more on semen, see:
On the bull semen explosion, animal husbandry, and how medieval people were actually nicer to cows
On semen retention
On sex with demons

My book, The Middle Ages, A Graphic Guide is out now.