My loves, it is with a heavy heart that I announce Nigel Farrage is once again saying some meaningless garbage.

I know, I know. You are not surprised, but I am afraid I have to respond to this douche canoe’s latest idiocy – in this case the following tweet: 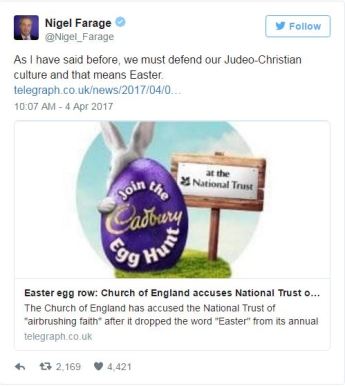 For those not up to speed with this particular flavour of British idiocy – at the moment the Archbishop of York, Nigel ‘Why don’t I have a chin? Let’s blame the EU’ Farage, and now Prime Minister Theresa May are all shocked and offended that Cadbury’s promoted an ‘Egg Hunt’ for the National Trust rather than a specific ‘Easter Egg Hunt’.

All of this is, of course nonsense, and ordinarily I try to ignore Farage as much as possible, being as my well-being is perched on a knife’s edge in today’s political hell scape. However, Farage just referred to England as having a ‘Judeo-Christian’ culture, and I cannot stand for it.

Leaving aside the issue that Jews don’t, you know, celebrate Easter, because they are Jewish, the idea that we here in the UK somehow celebrate the ‘Judeo’ in Judeo-Christian is offensive, given the hundreds upon hundreds of years of bloody repression of Jews in England.

Backing right the fuck up, it should be obvious that medieval society was not particularly kind to Jews. (If you are out of touch about this, check out Moore’s, The Formation of a Persecuting Society.) Because medieval Europe was largely Christian (except Spain, which was balling), Jews generally had a terrible time. They were restricted from pursing most trades, and as a result largely ended up in the financial sector.  Christians, you see, were prevented from lending money at interest because that constituted the sin of usury. Jews did not have the same religious prohibition and made the best of their place in a super stringent society by lending money. This probably led to the stereotypical bigoted idea of Jews as terrible money grubbers that we are all still dealing with.

Jews were so hated that they usually had to be under royal or imperial protection. People resented them because something something the death of Christ (which the Romans were totally off the hook for, obvs), and also because they now owed the Jews money.

English people, like most Europeans, were pretty big dicks to the Jews. First off, and for your information Mr. Farage, there were no Jews in England until after the Norman conquest. (Remember? When the French people took over? Because England is a part of Europe? YOU GIT.) William the Conqueror invited a group of Jews from Rouen to settle in England in 1070, though he wouldn’t let them own land. Because LOL.

By the twelfth century the Jews in London were granted a series of concessions by Henry I that meant they were treated a little bit more like people. They were allowed to buy and sell property, be tried by their peers, and swear on the Torah instead of the Bible. They were also allowed the right of movement around England – and I quote – ‘as if they were the king’s own property’. (Sicut res proproae nostrae). (I know. I know.)

So Jews were totally allowed to be people in England. You know, people who were royal property, but stuff got kind of bad after that. King Stephen decided to be a total dick and burn down a Jewish man’s house in Oxford because he wasn’t paying towards the king’s expenses. (Stay classy Stephen!) Then in 1144 there was the death of (soon to be saint) William of Norwich.  William had been an apprentice tanner. William showed up dead. The good people of Norwich decided that William had been killed by Jews because sure, why not. Obviously Jews had killed him as a part of a ritual murder that re-enacted a mass because blood libel is definitely a thing. Thomas of Monmouth wrote a crazy-ass hagiography about it and everything.  After this, any time there was an unsolved murder of a child, everyone in England blamed it on any Jew that could be found. This included Harold of Gloucester (d. 1168), Robert of Bury (d. 1181), and Little Hugh of Lincoln (d. 1255). All the boys were sainted. People were increasingly giant dicks to Jews.

Stuff got really bad under Richard the Lionheart. At his coronation a number of high ranking Jewish people showed up to do homage at Westmister, and they got kicked the fuck out of the coronation banquet and then attacked by a crowd outside. A rumor then started spreading that the king had ordered the London Jews to be massacred, and a good old fashioned mob went into the Old Jewry pretty much killing anyone they could get their hands on. The super friendly Judeo-Christian culture that Mr. Farage is celebrating then kicked off a series of violent attacks against various groups of Jews in Lynn, Stamford Fair, Colchester, Thetford, Ospringe, and Bury St Edmunds with dozens of people ending up dead. The Jews of Lincoln only survived an attempted massacre by taking refuge in the castle.

One of the worst incidents was, of course, the Pogrom (or Massacre) of York where on March 16 and 17 1190 a bunch of soldiers preparing to leave on the Third Crusade decided it would be classy and good to try to force the local Jews to convert. The Jews hid in the castle, but couldn’t escape the mob outside. Most of those inside decided to take their own lives, with the fathers of most families killing their wives, children, and themselves, and then setting fire to the keep. All the survivors were killed by the enraged bystanders. A Judeo-Christian culture – ladies and gentlemen!

During Richard the Lionheart’s absence the Jews that no one had managed to kill were generally harassed by William de Longchamp, and when Richard got his ass captured in the holy land, the Jews were told that they had to contribute 5,000 marks towards the king’s ransom. That is more than three times more than the city of London was supposed to contribute. Cute.

Eventually English kings found ways to make money that didn’t involve shaking down the Jews, and at that point the Church was putting more and more pressure on kings not to allow Jews to lend money to Christians. So at this point Edward I was just like, ‘Sod it, let’s just kick all the Jews out of the country.’ On July 18 1290 it was decreed that all Jews should be expelled by All Saints Day that year, with somewhere between 4,000 and 16,000 Jews forced to leave. I mean – what an amazing cultural exchange we had here! Wow!

Jews were eventually allowed back in the country in 1655 when members of the Dutch Jewish community directly approached Oliver Cromwell. Don’t be fooled by this though. Cromwell was, as many important historians have noted, a total Puritan douche nozzle. He thought Jews should be let back in because – in terms of Christian apocalyptic theory – Jews are necessary at the End Times because they first have to be swayed by and worship Antichrist, and then convert to Christianity. Then the world can end. Isn’t that nice? What a great spirit of cultural cooperation! Anyway, Cromwell’s Puritan ass wouldn’t have eaten chocolate egg one on Easter because that would be fun, and as we all know, God hates fun.

My point here is that none of this points to a ‘Judeo-Christian culture’ like Farage wants you to believe in. He’s just using the phrase to exclude Muslims from British society, even though they are here to stay, fam.

Why anyone wants to choose Easter Eggs as the hill to die on is a mystery to me, and the entire ‘controversy’ is a manufactured tempest in a tea cup. My major point is that you shouldn’t trust racists when they tell you about the ‘culture’ of anywhere. They don’t know a damn thing about culture or history.

For more on politics and the medieval period see:
History is a discipline, not a virtue
On medieval healthcare and American barbarism
On chronicles versus journalism and ruling versus governing
On the medieval separation of Church and state
On the American election, teaching history, and why it matters
Such a nasty woman – on Eleanor of Aquitaine, femininity, reputation, and power
On power and entitlement to the bodies of lower-status women
Islam was the party religion, or, why it is lazy and existentialist to say that Islam oppresses women
The medieval case for remain, or, fuck Brexit