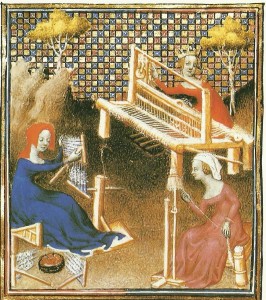 Another week, another chance for the world to be a misogynist hellscape. (Just, endless sighing. Amiright?) One of this week’s horrors has been brought to you by right wing rag extraordinaire and Suzanne Venker, a self-described “feminist fixer” who claims to “Free Women From Feminist Lies So They Can Find Lasting Love With Men” [sic]. Our intrepid anti-feminist in question has a particular mark this week – the millennial woman (Hey boo!), drowning in debt from “piling up” degrees (relatable!) which are “supposed to help them get established for marriage” (less relatable!) and are now sad.

According to the luminary mind in question, all of this means that millennials are the “first generation” of women to do such a thing and, whelp, not so much.

What do I mean by that? Well, women – married and otherwise – have been working throughout the entire course of human history, and historically women have always been expected to work in various capacities, from farm work to highly-skilled trades. (As per usual, as a Europeanist, I’m going to focus on European societies here, but world-wide women have certainly been working and still are. I just lack the specialism to speak about that and I stay out of things when I don’t know what I am talking about, Suzanne.)

We can pick Rome as a starting point for our discussion, because those slave-loving weirdos are the bedrock on which medieval people’s society was built, which has in turn built ours. On the Italian peninsula during the Roman Empire it is generally estimated that about 30-40% of the population were slaves, and of course a little more than 50% of those slaves were women.[1] It was those slave women who did the bulk of women’s work at the time. These slaves usually came from conquered peoples and did all sorts of work. Often they were serving maids, but they also had higher-prestige jobs as secretaries, scribes or calligraphers as well.

While slaves might have been doing the most, women across all levels of society had jobs and careers. Poorer women did the bulk of paid labour, especially at market stalls. Because people in cities often lived in insulae or apartment buildings, they often didn’t have kitchens. That meant they purchased cooked food from the women at the market. Working class women were also an integral part of the entertaining classes. They worked as dancers, acrobats, actors and sex workers. In other words, women were doing all of the work that made cities interesting and fun places to be.

Out in the country, meanwhile, peasant women – both free and unfree – were working on farms doing pretty much the same things as men were. They helped plant, harvest, tend the animals, all that good stuff.

Middle-class women meanwhile worked as weavers, potters, teachers, or they ran stores (as opposed to market stalls). They were also artists who painted friezes and made mosaics. They worked as scribes and secretaries alongside slaves. At the same time, rich women were expected to work and often did so specifically in money lending, painting, or pottery. Point is, Roman women could hustle.

Once Rome fell the whole working situation didn’t change much. Peasant women remained the OG hustlers. On farms they took care of the animal husbandry, and the planting, threshing, and gathering of crops. They brewed the beer for the household, which was the most common drink in a world where water wasn’t always potable and had to be treated prior to consumption. (The beer was what we call “small beer” though. It had a low alcohol content. They weren’t wandering around drunk. There was shit to do.)

Most peasant women also produced their own textiles in home, meaning they might be involved in every aspect of cloth production through to sewing. If you think that sounds like a lot, it was, and you should bow down.

Meanwhile in the cities, women were also on the grind. Like the Romans, lower-class women might be maids, or cooks, or bakers, or run market stalls. We even have records of women working as city guards or fighting in armies.

Middle class women, meanwhile were employed in trades of all sorts. We have records, for example, of a female blacksmith[2] working out of the Tower of London. More commonly they would work as grocers, chandlers, or work in stores. They were also well-represented as artists and artisans.

Middle-class women were expected to be literate and numerate and run their household and business budgets. This was an integral thing that made middle-class women marriageable. No man with a business wanted a woman who couldn’t run the sums for him. It was just unheard of. Because women were expected to know so much, they were often also teachers.

Women were by and large the people responsible for midwifery in the medieval period as well, and it was a woman – Trota of Salerno – whose techniques were gathered into the base of The Trotula, a group of texts on women’s health with additions by her fellow medieval medical practitioners. And women were  medical practitioners of various types in the medieval period until medicine became the purview exclusively of those with university degrees, which they were barred from pursuing. (*cough*)

Of course, nuns spent their whole damn lives working: writing manuscripts, running hospitals, and working 4 the Lord while being married to him. (Unless the ran off to bone down, which, respect.) So I mean, that’s an entire group of women being smart rather than marrying, but ok Suzanne.

Noble and royal women also worked, and were very involved in political intrigue, as our girl Eleanor of Aquitaine has shown us. When they weren’t starting wars with their husbands, rich ladies might simply compose poetry or write literature, like Christine de Pizan.

This didn’t just go away in the modern period. Women continued to work in much the same areas, and their roles expanded during the industrial revolution. Textile workers, for example were almost exclusively women. Teaching remained a largely female role. When new concepts like nursing were invented it was women who staffed it. Even the now almost wholly male world of computing was once the purview of women almost exclusively.

That’s a lot of work, right? And thing is they did all of this while also raising the babies, doing the laundry, and keeping the fire going. Women have been working.

The point is, it is “traditional” for women to work, no matter what these clowns would have you believe. It was only a space of a few decades in the twentieth-century when middle class women exclusively were expected not to work outside of the home. It’s a post-war, and largely white phenomenon that has pretty much no historical pedigree and led to a lot of Valium and daytime drinking.

And here’s the thing, even now it is very normal and even expected for middle class and even rich women to work outside the home, if we are being honest. The concept of a “housewife” at this juncture is largely the purview of the rich denizens of reality show programmes and even those girls have side-hustles. Wine screaming can only get you so far. We absolutely expect women to have some sort of career that is somewhat reminiscent of that of her romantic partner(s). If a woman were to state that she has little ambition other than being a wife and mother she’d probably be castigated as a gold digger. Be real now.

If you wanted to read all of these historical and sociological points in an uncharitable light, you could be like, “Yeah well Suzanne’s basic ass here isn’t talking about work per se, she’s talking about women taking degrees and then getting into too much debt”. To that I say – yeah because degrees are currently necessary to enter the workforce on any sort of liveable wage.

In order to participate in late stage capitalism, almost anyone is expected to have a BA at least for an entry-level job flipping copies. And women aren’t considered “anyone”, are they? Women, it has been shown repeatedly, need to excel in order to be seen as comparable to their average-ass male peers. We have to be the shiniest and best and then maybe we can take the minutes at the meetings. In order to shine out now, that means your CV better be coming with a bunch of initials after your name.

Does it suck? Hell yeah it does! Does this have anything to do with feminism? No! This is about the fact that women have always had to fucking work and capitalism currently requires you to take on debt in order to do so. That’s not on women, millennial or otherwise.

Women have always been workers, and damn good ones too. Marriage as something that took women out of the workforce has only been a phenomenon for a very small amount of time, and that little post-war moment is done now. If you have a problem with the debt women might take on in order to get a career, you best speak to capitalism about it, because history will not back you up on this.

In other words, get fucked Suzanne.

For more on women in the medieval period see:
On constructing the “ideal” woman
On Jezebel, makeup, and other apocalyptic signs
Talking medieval women on History Hack
On “the way of carnal lust”, Joan of Leeds, and the difficulty of clerical celibacy
Considering bad motherfuckers: Hildegard of Bingen and Janelle Monáe
On sex, logic, and being the subject
On sex work and the concept of ‘rescue’
On the Ideal Form of Women
On women and desire
Such a nasty woman – on Eleanor of Aquitaine, femininity, reputation, and power
Islam was the party religion, or, why it is lazy and essentialist to say that Islam oppresses women
These hoes ain’t loyal – on prostitutes and bad bitches in medieval and hip hop culture
Let’s talk about Game of Thrones part 2: on marriage and Sansa

3 thoughts on “On Women and Work”